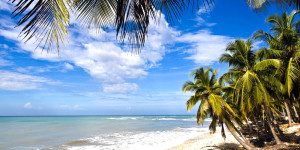 Here are some things to keep in mind as you plan your trip to Haiti:

Do U.S. citizens need a visa to visit Haiti? Visitors from the U.S. to Haiti may not require a visa depending on the length of stay and/or onward passage being assured.  An airport tax of $30 plus $5 is currently required from foreigners departing Haiti, but is generally included in the price of airline tickets. Visitors are required to have a valid passport.

Driving: On the right – Canada and U.S. driver’s license is valid. 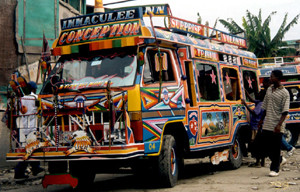 Tap-taps are a colorful and common means of traveling short distances in and between towns.

Local Transportation: Tap-taps (minibuses and flatbed trucks brightly painted) are the means of public transportation. Fixed routes & fares, approx. US $.75 per person. Public taxis and rental cars are another means of getting around. Full size buses are used for traveling between major cities. Traveling between Port-au-Prince and Cap-Haitian via small plane cost approximately US $100.

Official Language: French and Creole; English is spoken widely in the capital.

Tipping and Taxes: There is a government tax of 10% and hotels will add a service charge of 5% to your bill. Restaurant tabs should be tipped 6 – 10%, if not already added. Tip taxi drivers if you find them helpful.